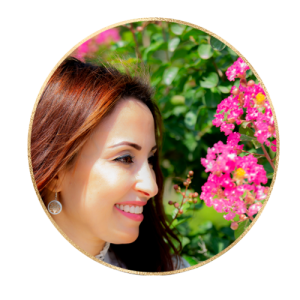 I am Fatma Mohammed

My journey in consciousness and development began in 2014 with very pure coincidence ..
My life was darker than black.
I was a body without a soul. He walked on the ground, because I bear the responsibility of my son’s dream. 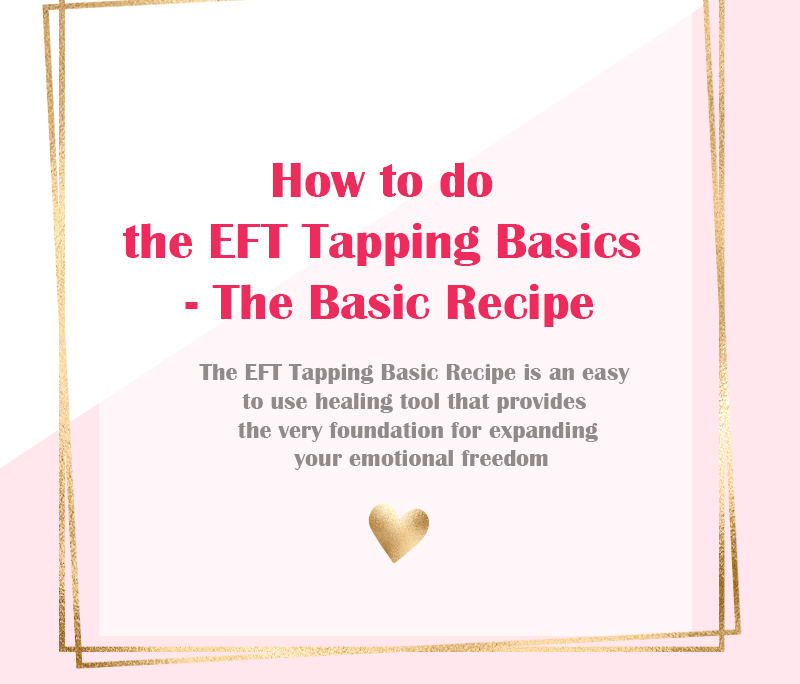 The EFT Tapping Basic Recipe is an easy to use healing tool that provides the very foundation for expanding your emotional freedom. It is the tapping procedure that we use in every round of EFT … it is easy to learn and easy to apply, which is why EFT has become well known as a tool that anyone can use. By itself, the EFT Tapping Basic Recipe can be applied to any issue you want, and although it is still only the first step to EFT’s full potential, it continues to provide results that range from encouraging to impressive. The rest of the benefits come when you learn how to aim the tapping procedure at the best targets, but you will need to know the basics before learning the rest, so let’s get started!

A recipe, of course, has certain ingredients which must be added in a certain order. If you are baking a cake, for example, you must use sugar instead of pepper and you must add the sugar before you put it in the oven.

The EFT Basic Recipe is no exception. Each ingredient must be introduced precisely as described and they must be added in the proper order.

Although I am going to some length to describe it in detail, The EFT Tapping Basic Recipe has only 5 brief steps (ingredients) and takes very little effort to learn. Once memorized, each round of it can be performed in about 30 seconds. It will take some practice, of course, but after a few tries the whole process becomes familiar and you can do it in your sleep (millions have done this, including children). You will then have a permanent tool that you can use for a lifetime.

“The cause of all negative emotions is a disruption in the body’s energy system.”

It follows, then, that energy disruptions are the reason we have any kind of emotional issue like grief, anger, guilt, depression, trauma, and fear. Since both physical and performance issues often have emotional roots, it also follows that clearing energy disruptions can be useful for those as well.

This wording is an essential part of the process because it tells our system what we are working on. Negative emotions come about because we are tuned into certain thoughts or circumstances which, in turn, cause our energy systems to disrupt. Otherwise, we function normally. One’s fear of heights is not present, for example, while one is reading the comic section of the Sunday newspaper (and therefore not tuned in to the problem).

Once tuned into the issue, the Tapping stimulates the energy pathways thereby balancing the resulting energy disruptions. Also, for clarification, the points we use are at or near the endpoints of the energy pathways (meridians and vessels) … OR … at points along these pathways that are close to the body’s surface.

You may be aware that acupuncturists study and use over 300 meridian points on the body instead of the mere handful that are used by the EFT Tapping process. Further, unlike EFT, acupuncturists associate each of the energy pathways with body organs (kidney, stomach, spleen, etc.) and emotions (anger, fear, sadness, etc.). We are not denying the validity of this approach but we are ignoring it. EFT Tapping represents a different use of these pathways that allows someone with no formal training in Chinese medicine to realign disruptions on their own with a simple process.

You may learn the intricacies of the Chinese meridian system if you wish, but this knowledge is not necessary to generate first-class results with EFT. In practice, the 12 meridians and 2 governing vessels are interconnected and thus sending balancing energy down one pathway influences other pathways. That is why we usually need to address only a few pathways to get the job done.

These illustrations, together with the written aids below them, are self-explanatory and are explored in detail later (including videos). For now, just locate each of these points on your own body and touch each of them with your fingertips.

KC: The Karate Chop point (abbreviated KC) is located at the center of the fleshy part of the outside of your hand (either hand) between the top of the wrist and the base of the baby finger or….stated differently….the part of your hand you would use to deliver a karate chop.

TOH: On the top of the head. If you were to draw a line from one ear, over the head, to the other ear, and another line from your nose to the back of your neck, the TOH point is where those two lines would intersect.

SE: On the bone bordering the outside corner of the eye. This point is abbreviated SE for Side of the Eye.

UE: On the bone under an eye about 1 inch below your pupil. This point is abbreviated UE for Under the Eye.

UN: On the small area between the bottom of your nose and the top of your upper lip. This point is abbreviated UN for Under the Nose.

Ch: Midway between the point of your chin and the bottom of your lower lip. Even though it is not directly on the point of the chin, we call it the chin point because it is descriptive enough for people to understand easily. This point is abbreviated Ch for Chin.

UA: On the side of the body, at a point even with the nipple (for men) or in the middle of the bra strap (for women). It is about 4 inches below the armpit. This point is abbreviated UA for Under the Arm.

These tips answer the most common questions.

The 5 Steps of The EFT Tapping Basic Recipe

All you do here is make a mental note of what ails you. This becomes the target at which you “aim” the EFT Tapping Basic Recipe. Examples might be: Sore shoulder, my father embarrassing me at my age 8 birthday party or hitting that high singing note.  Be sure you are only targeting one issue at a time. As you will learn later, trying to combine issues in the process will compromise your results.

Here you establish a before level of the issue’s intensity by assigning a number to it on a 0-10 scale where 10 is the worst the issue has ever been and 0 is no problem whatsoever. This serves as a benchmark so we can compare our progress after each round of The EFT Tapping Basic Recipe. If, for example, we start at an 8 and eventually reach a 4, then we know we have achieved a 50% improvement. The number of possible issues we can address with The EFT Tapping Basic Recipe is endless and they don’t all fit into neat testing boxes. That is why we have an entire segment later on dedicated to Testing Your EFT Tapping Work. For this stage of your learning, however, here are some useful methods to help you access your issue(s) and arrive at your 0-10 numbers. They apply to most issues.

The Setup is a process we use to start each round of Tapping. By designing a simple phrase and saying it while continuously Tapping the KC point, you let your system know what you’re trying to address.

When designing this phrase there are two goals to achieve:

1)  acknowledge the problem
2)  accept yourself in spite of it

We do this by saying:

The blank above represents the problem you want to address, so you can just insert things like:

By using “Even though I have this _______________,” you will automatically choose something that represents your experience, your reaction, or a problem that you recognize as something that belongs to you, and that is an important feature.

By identifying the problem with this phrase, you “set up” the initial behind the scenes so the Tapping has something to resolve.

The language that we use always aims at the negative. This is essential because it is the negative that creates the energy disruptions (zzzzzts) that The EFT Tapping Basic Recipe clears (and thus brings peace to the system). By contrast, conventional methods and popular self-help books stress positive thinking and preach avoiding the negative. This sounds good but, for our purposes, it does little more than cover over the negative with pleasant sounding words. EFT, on the other hand, needs to aim at the negative so it can be neutralized.  This allows our natural positives to bubble up to the top.

This is the workhorse part of The EFT Tapping Basic Recipe that stimulates/balances the body’s energy pathways. To perform it, you tap each of the points shown in the Sequence Points diagram (see above) while saying a Reminder Phrase that keeps your system tuned into the issue. I list the points below followed by a description of the Reminder Phrase:

The Reminder Phrase is quite simple as you need only identify the issue with some brief wording. Depending on your issue, you might say the following at each tapping point….

“This sore shoulder”,
“My father embarrassed me”,
“This difficulty in singing that high note.”

Finally, you establish an “after” level of the issue’s intensity by assigning a number to it on a 0-10 scale. You compare this with the before level to see how much progress you have made. If you are not down to zero then repeat the process until you either achieve zero or plateau at some level. You can also include some additional Tapping points that will be introduced in the next section of this article. Otherwise, you will likely need to “get to the roots of the issue”. 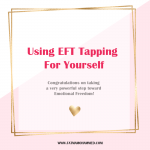 Using EFT Tapping For Yourself 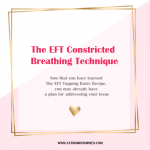 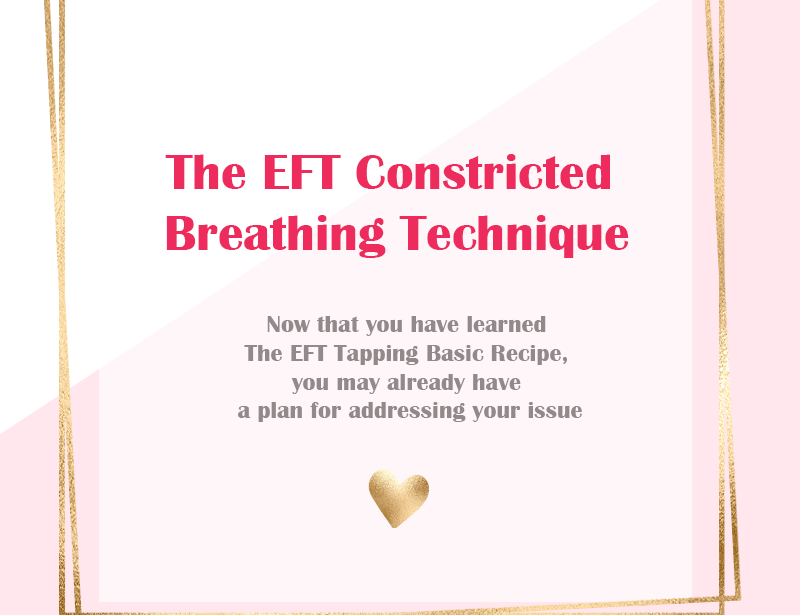 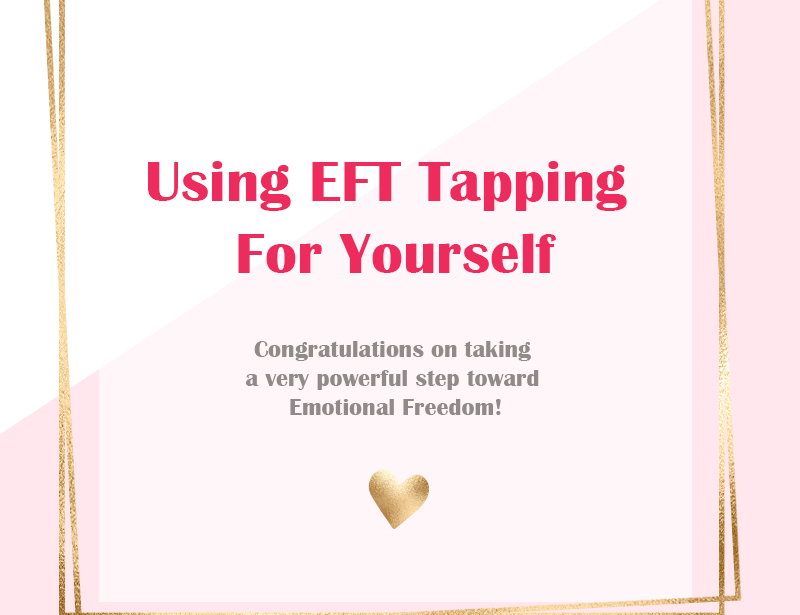